(WASHINGTON, D.C. – May 23, 2017)  The National Italian American Foundation (NIAF) and U.S. Italy Fulbright Commission join the Fondazione Giovanni e Francesca Falcone in honoring the memory of Judge Giovanni Falcone, his wife Francesca Morvillo, and the three agents of his security detail, who were tragically killed 25 years ago, on May 23, 1992. 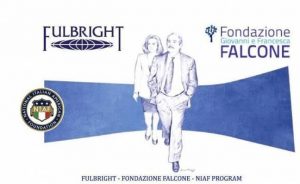 Born in Palermo, in 1939, Falcone spent the majority of his career as a prosecuting magistrate, tirelessly fighting against organized crime in Sicily. His duty and dedication to being a servant of the state, and investigative prowess, led to the sentencing of nearly 400 members of the Sicilian Mafia in 1987, during the famous Maxi Trial.

“For Italians and Italian Americans alike, Giovanni and Francesca Falcone are martyrs for the cause of lawfulness and honesty, and their legacy continues to inspire people around the world and will for generations to come. In the face of what is worst in the human condition, they held strong to what is best,” said John M. Viola, NIAF president and chief operating officer.

To honor Judge Falcone’s legacy, and all Mafia victims, the Fondazione Giovanni e Francesca Falcone and the Fulbright Program in Italy, in cooperation with NIAF, established the Fulbright- Fondazione Falcone-NIAF Awards. Each year the program grants one American student and one Italian student funding to carrying out research in the field of criminology.

“It is an honor for the Fulbright Commission to be in Palermo for the 25th anniversary of the passing of Judge Giovanni Falcone. Through our partnership with NIAF and the Fondazione Falcone, we have two grantees that testify the importance of promoting justice and the rule of law to younger generations,” said the Commission’s Executive Director, Paola Sartorio.

The National Italian American Foundation (NIAF) is a non-profit, non-partisan organization dedicated to preserving, promoting and protecting the Italian American heritage and culture. To learn more about the Foundation and become a member, please visit www.niaf.org.

The Fondazione Giovanni e Francesca Falcone was established in Palermo, Italy, in 1992, to sponsor cultural  activities, studies and research that promote the development of anti-mafia culture in society and, in particular, among young people.

The Fulbright Program in Italy promotes study, research and teaching opportunities in Italy and the United States through a program of scholarships for Italian and U.S. citizens.