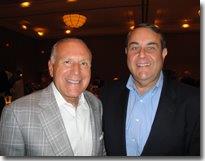 “On behalf of the National Italian American Foundation (NIAF) Board of Directors, we are deeply saddened by the passing of one of our distinguished Board members, Mark Valente lll. We extend our heartfelt condolences to his wife, Claudia, and the Valente family. He died on August 3, after a brief illness.

“A real champion of the Italian American community, Mark worked tirelessly to support and promote the programs at NIAF. He devoted his time and expertise as a political strategist to further advance the Foundation’s initiatives in public policy by spearheading one of NIAF’s signature programs, the NIAF-Frank J. Guarini Public Policy Forums. He secured prominent speakers and worked closely with the Italian American Congressional Delegation to ensure that members of Congress were actively involved with the Foundation.

“With great passion, he organized several NIAF events at the presidential nominating conventions, most recently in Cleveland, Ohio.

“A proud grandson of Italian immigrants who emigrated from Abruzzo and Michigan native, he served as a prominent member of the Foundation’s Board of Directors since 2012 and was recently nominated to serve another four years. He proudly held the leadership role as chairman of  NIAF’s Public Policy and Government Relations Committee.

“Mark’s devotion and passion to Italian Americans was unquestionable. He exhibited unending energy, intellectual rigor and dignity in everything he did.

“His legacy will be long remembered with the great affection and admiration.  Mark will be deeply missed by our NIAF family.”