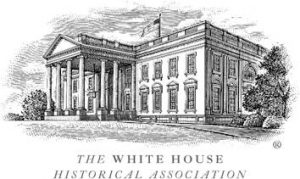 (Washington, D.C.) — The White House Historical Association is honored to host today a full-daylong educational symposium on the close connection between the United States and Italy including influences on political philosophy, architecture, cuisine, and more through the lens of White House history. Offered in partnership with the Embassy of Italy, the National Italian American Foundation, and the Italian Cultural Institute in Washington, D.C., this is the first in a three-year series of international influence on the White House created by the White House Historical Association.

Professor Campbell Grey is providing the keynote address at today’s sold out symposium, examining the many Italian influences present in the White House from early presidents to the objects in the White House Collection. Grey serves as an Associate Professor in the Department of Classical Studies at the University of Pennsylvania. He is a social historian of the Roman and post-Roman world, and is a residential Faculty Fellow of the King’s Court English College House. 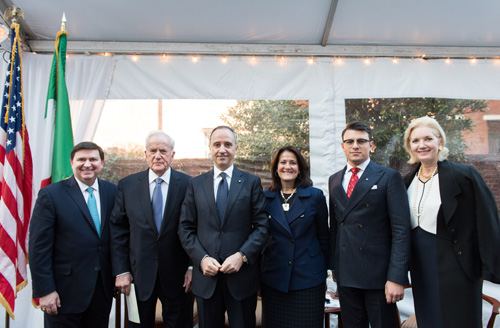 “Encouraging a robust, engaging dialogue about the international influences in White House history over time on a range of topics is an important educational exploration for the Association,” said Stewart D. McLaurin, President of the White House Historical Association. “We are honored to begin this series with such prestigious partners and scholars examining the important role Italian culture has had on White House history dating back to its creation in the eighteenth century.”

Speakers throughout the day are engaging in panel discussions about the cultural connections between the U.S. and Italy as they relate to the White House, including a luncheon featuring culinary offerings inspired by menus from past state dinners for visiting Italian leaders. Luncheon panelists include the Honorable Anita B McBride, former Chief of Staff to First Lady Laura Bush; the Honorable Lloyd N. Hand, former United States Chief of Protocol for President Lyndon Johnson; and the Honorable Catherine S. Fenton, former Social Secretary for First Lady Laura Bush and Deputy Social Secretary for First Lady Nancy Reagan and First Lady Barbara Bush.

“I wish to sincerely thank the White House Historical Association, NIAF, all the scholars who are contributing to today’s event and my predecessor, Claudio Bisogniero, for transforming what was already a special day – the very day when I officially start my mission as Ambassador of Italy to the U.S. – into a truly unforgettable one,” said the new Ambassador of Italy to the United States, Armando Varricchio. “This symposium looks at some of the “giants” in the history of our relations. Italian and U.S. intellectuals were in close touch at the birth of this nation, and at the beginning of the Italian Risorgimento (the movement that led to Italy’s unification): two pivotal moments in our respective Nations’ histories. From Filippo Mazzei, who chose Virginia as his adoptive home in 1776, and to whom we owe the notion that “all men are created equal”, clearly enshrined in the American Declaration of Independence, to Gaetano Filangieri, who corresponded with Benjamin Franklin and strongly influenced the text of the US Constitution and Bill of Rights; not to mention Italy’s contribution to the art and architecture of the White House. Today’s event is the start of a new journey into the discovery of the close historic ties that bind Italy to the United States.”

“On behalf of the members of the NIAF Board of Directors and Foundation’s leadership, I am honored to welcome the newly appointed Italian Ambassador H.E. Armando Varricchio to today’s educational symposium showcasing the significant role that Italy has had on White House history,” NIAF Co-Chair of the Education and Grants Committee Anita Bevacqua McBride said.  “Together with leading scholars and our prominent symposium partners, we are pleased to explore the influences of these rich historical and cultural connections between our two great nations. These educational studies will have a lasting effect on research by future generations of students.”

The symposium will conclude with a live performance by Ricardo Herrera and Tatiana Loisha, representing the Daniel Ferro Vocal Program based in Greve in Chianti, Italy, of historic Italian music previously performed at the White House.

Note for Members of the Press: Images from the event are available upon request. Please contact Lara Kline of the White House Historical Association directly, lkline@whha.org or 202-218-4316.

About The White House Historical Association
First Lady Jacqueline Kennedy envisioned a restored White House that conveyed a sense of history through its decorative and fine arts. She sought to inspire Americans, especially children, to explore and engage with American history and its presidents. In 1961, the White House Historical Association was established to support her vision to preserve and share the Executive Mansion’s legacy for generations to come.

About the Embassy of Italy
The Embassy of Italy in Washington DC is the largest Italian bilateral embassy worldwide.  The Embassy coordinates a network of 9 Consulates, 5 Cultural Institutes, 6 Italian Trade Agency offices, and 3 Italian Tourist Board offices. The staff of the embassy, based in various offices, is composed of personnel from the Italian Ministry of Foreign Affairs and International Cooperation and from other Italian ministries and public entities.  Through its Consular section, the Embassy of Italy in Washington also offers a host of consular services to Italian and non-Italian citizens living within its jurisdiction.