Italian-American Journalists Called upon To Protect, Promote, and Preserve the Italian Heritage 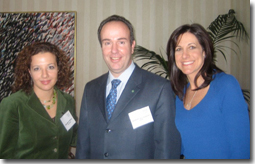 (WASHINGTON, D.C.—January 24, 2007) Advancing an Italian-American agenda in Chicago was the theme of the National Italian American Foundation’s (NIAF) fourth annual media networking forum on January 23. Prominent Italian-American community leaders spoke about the importance of protecting, promoting, and preserving the rich history of Italian Americans. The luncheon, which was underwritten by the Hilton Chicago, was hosted by Robert Allegrini, NIAF regional vice president for the Midwest and regional director of public relations for Hilton Hotel Corporation. The event was co-chaired by Dina Bair, an anchor at WGN-TV 9, and Yolanda Maggi, a producer at Fox News.

NIAF President Salvatore J. Zizza opened the luncheon and outlined the important role the media plays in helping NIAF reach its goals. Zizza introduced the Foundation’s six 30-second public service announcements and encouraged guests to have them broadcast at their stations.

In order to move this agenda forward, as well as energize the Italian-American community, Allegrini called upon three respected community leaders to address this topic.

George Randazzo, founder and president of the National Italian American Sports Hall of Fame (NIASHF), previewed “A Level Playing Field,” a film and educational program that will be used to promote diversity in sports and highlight the contributions of Italian Americans and others to sports.

Dominic DiFrisco, president emeritus of the Joint Civic Committee of Italian Americans, discussed the responsibility of guests to foster and protect their heritage.

Fulvio Calcinardi, executive director of the Italian American Chamber of Commerce, announced plans for the inaugural “Italy in Chicago”, September 21-23 at Navy Pier in Chicago. The event will promote the rich culture of Italy and Italian Americans and will showcase the finest of Italy’s culture, style, trade, and the arts.

To close the luncheon, NIAF grant recipient Gia Amella, executive producer of “And They Came to Chicago: The Italian American Legacy,” previewed a trailer of the television documentary, which is scheduled to premiere this spring. She has received overwhelming support for the documentary as the immigrant theme resonates within the Italian-American community.

NIAF’s Media Networking Forums help communications professionals share ideas and work together to ensure that all Americans are treated with respect and that negative stereotypes are not reinforced in the industry.

The National Italian American Foundation (NIAF) is a non-profit, non-partisan foundation dedicated to promoting the contributions of Italian Americans. The Foundation has a wide range of programs that provide scholarships and grants, conferences and cultural seminars. Visit our Web site at www.niaf.org