**A Celebration of Family, Culture, Song and Food**

(WASHINGTON, D.C. – October 19, 2015) The National Italian American Foundation reinvented its 40th Anniversary Awards Gala Weekend into an extravaganza of song, homage to heritage, family ties, and passion for food. The Foundation’s celebration of its 40-year milestone united Italian American and Italian cultures of the past with an eye to the future. The NIAF gala was presented by Alitalia in an unprecedented partnership between the Italian airline carrier and NIAF.

NIAF Board member and Emmy Award-winning Fox News Anchor and Global Markets Editor Maria Bartiromo, and NIAF President John M. Viola, co-hosted one of the most popular black-tie galas in our nation’s capital at the Washington Marriott Wardman Park Hotel on October 17, 2015. 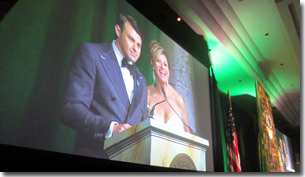 “The only reason I am here tonight is because of my father, he taught me the importance of heritage,” said 12-time MLB All-Star Mike Piazza. He encouraged the guests to pass our rich heritage and culture to the next generation. Piazza was joined by actor Chazz Palminteri, who shared a similar message: “I beg you to give to NIAF; this Foundation represents leadership in the Italian American community,” said Palminteri, urging guests to not forget NIAF’s mission and help students through scholarships. 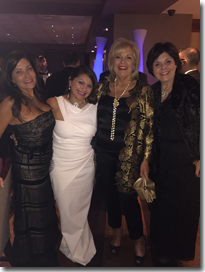 This year’s 40th Gala Dinner Chair and a NIAF Board Member J.J. Cafaro, welcomed a sold out ballroom of more than 1,700 guests from across the United States and Italy. Patricia de Stacy Harrison, 40th anniversary celebration chair, NIAF vice chair, and president and CEO of the Corporation of Public Broadcasting, introduced a video highlighting what it means to be an Italian American from its leadership, past and present.

NIAF awarded the Foundation’s Special Achievement Award in Business and Health to Richard E. Caruso, Ph.D., founder and director of Integra LifeSciences, a world leader in medical technology. “It has been my lifelong goal to make a difference in people’s lives, and I’m grateful that I’ve had an opportunity to do so.” Caruso said.   He was introduced by Peter J. Arduini, president and CEO of Integra LifeSciences Holdings Corporation, and a member of the NIAF Board of Directors.

Steve Perillo, president and owner of Perillo Tours, America’s largest travel company, received the NIAF Achievement Award in Business. Perillo was the longtime apprentice to his father, the legendary Mario Perillo, “Mr. Italy.” He spoke about the family-owned company that is now celebrating 71 years in the travel industry. 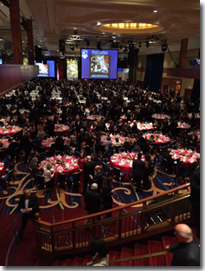 The Sicilian Tenors, including Aaron Caruso, Elio Scaccio and Sam Vitale, stepped on to the stage to serenade the guests to “O Sole Mio” before NIAF Executive Vice President and chair of the Italian American Leadership Council (IALC) John F. Calvelli introduced the IALC’s work in finding the next group of leaders.

NIAF’s Co-Chair of the Education and Grants Committee and a member of the Foundation’s Board of Directors Anita Bevacqua McBride welcomed the 40 under 40 list of Italian Americans, and introduced NIAF’s new Italian American leadership fellows from universities across the country.

The National Italian American Foundation – Works to promote the rich culture and heritage of Italy!

Watch Inside Look’s video coverage of the 2015 NIAF Gala!

Upon receiving his award, Berardi spoke about the importance of the support and love he received from his family as the best medicine after a recent accident. Gabelli dedicated his honor to his father. He explained the importance of the scholarships NIAF awards to young people and giving back that opportunity for others to achieve.

From the podium, Nuschese dedicated his award to his mother and the mother of his son, Gianfranco. “They taught me the value of life, love, respect and honesty,” said Nuschese. He also recognized the late Terrence Lanni, former CEO of MGM Resorts International, who shaped my life and career. “His memory and spiritual legacy is part of my life.”

When Sergio Marchionne, CEO of Fiat Chrysler Automobiles, N.V., came to the stage, he explained, “I am merely here to plead my case, my outfit tonight is an international dress code.” Since he spends most of his time on an airplane, he wears the classic white shirt and a black pull over sweater. “Our sense of place stays with you where you go. My father taught me integrity, civil engagement and sense of duty.  My mother taught me strong will and sensitivity,”  said Marchionne, who received the NIAF Special Achievement Award in International Business.

“I am a legal immigrant, blessed to be born in Italy and adopted by the United States,” was the message from Josephine J. (Gargiulo) Templeton, M.D., trustee of the John Templeton Foundation.  NIAF awarded Templeton with the Foundation’s Special Achievement Award in Philanthropy. She thanked Justice Samuel A. Alito Jr. for recreating and writing the speech he gave at the 150th Anniversary of the Gettysburg Address.

Alito welcomed the men and women who bravely served in the military. He recognized them as the “voice for Italian Americans.” Alito also introduced a video chronicling the activities of the NIAF’s Public Policy program.

To kick off NIAF’s Gala Weekend, the Foundation partnered with the Italian American Studies Association (IASA) to host a series of conferences on Thursday, October 15, through Saturday, October 17.

Friday evening, SNL legend, NIAF Celebrity Ambassador, actor, entertainer and radio host Joe Piscopo launched the weekend’s evening celebrations with “Joe Piscopo and Friends Celebrate Sinatra’s 100th Birthday.” Piscopo was joined by Valenti and Deana Martin, daughter of the late Dean Martin, as the Radio King Orchestra stepped up the beat throughout the evening. NIAF auction chairman, Rosa was on hand to encourage guests to bid on one-of-a-kind items during the live and silent auctions and to purchase a chance to win a Fiat 500 L Lounge.

Beginning Saturday, NIAF and the IALC hosted a leadership forum to discuss potential strategies to address the contentious issues surrounding Columbus Day. Noted journalists, representatives from the National Christopher Columbus Association and the Italian Sons and Daughters of America, as well as leaders of the Italian American community joined the panel.

Popular weekend events included a documentary screening of “The Tale of the Other Italy,” produced by Rai Italia and directed by a Luigi Maria Perotti. The film tells the Italian emigration story through the various entry ports. It shows how Italian Emigration Museums around the world with their projects, pictures and documents plays a key role in preserving and understanding the past as well as understanding the new Italian emigration in the world.

NIAF also hosted its signature wine tasting featuring 11 Amarone wines from Italy’s Northern regions with a sommelier on hand to lead guests through a spectrum of Italian wines. Wines were assembled by Patrizia Marin, president of Marco Polo Experience; representing the 11 vineyards were Marie Sabrina Tedeschi of Tedeschi Wines and Antonio Cesari of Brigaldara Wines.

The weekend also featured a medical conference, “Health and Research: Beyond The Eyes” with a panel discussion about the latest research and common eye conditions with Antonio Giordano, M.D., Ph.D., president and founder of Sbarro Health Research Organization Inc., and a NIAF board member, and other notable speakers including Michele Masucci, Ph.D.; Vito M. Campese, M.D.; and Paul Tapino, M.D.  Giacomina Massaro-Giordano M.D. and Dolores Del Raso presented the 2015 Giovan Giacomo Giordano NIAF Award for Ethnics and Creativity in Medical Research.

Also during the weekend, Viola hosted “NIAF – Ieri, Oggi, Domani,” an engaging panel discussion focusing on the current state of the Italian American community and its challenges as we move forward. Viola was joined by the Foundation’s Chairman Joseph V. Del Raso, board leaders Calvelli, and Harrison; board members Nicholas R. Caiazzo and John P. Rosa: and Jeff Browning, president of the Italian American Staff Association.

To conclude the Gala program, NIAF Chairman Joseph V. Del Raso thanked the Board of Directors, honorees, staff and supporters. “What a party and the best is yet to come,” Del Raso said. On stage, a three-tiered birthday cake from Carlo’s Bakery, of the Cake Boss fame, was presented to celebrate the Foundation’s 40 incredible years. Del Raso led the guests in singing “Happy Birthday to us.”

Immediately following the Gala, guests proceeded to attend the Foundation’s famed After Hours Celebration featuring live entertainment with singer and songwriter Ciro Di Lorenzo, and others in the Marriott Lobby Lounge.