(Washington, D.C. –  April 15, 2016) Honorable Armando Varricchio, newly-appointed Ambassador of Italy to the United States, gave the keynote address at the NIAF- Frank J. Guarini Public Policy Forum Luncheon on April 14, 2016. Ambassador Varricchio spoke about the vision for his tenure in the United States. 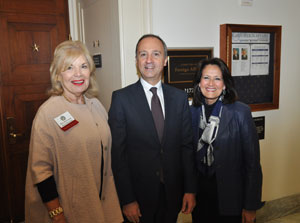 House Minority Leader Nancy Pelosi greeted Ambassador Varricchio, “What an honor to welcome you, Ambassador.  A toast to you in your new assignment: “Viva L’Italia, God bless America,” said Pelosi.  The guests stood and applauded the ambassador.

Representatives Tiberi and Pascrell spoke about the pride they both share for their rich Italian heritage and passion for all things Italian. “We are here to do anything to make your stay, Mr. Ambassador, a good one,” said Rep. Pascrell.

In the Gold Room of the Rayburn House Office Building, Ambassador Varricchio shared his thoughts during a recent trip to New York to visit the National September 11 Memorial & Museum. “I thought about our ancestors and their tremendous contributions. Thanks to the daily efforts of our parents and grandparents in building this nation,” said Amb. Varricchio.

Concerning the current situation in Italy, he spoke about the internal reforms and changes Italy is constantly making to recover in a competitive world. The Ambassador also addressed the refugee problem and how Italy is working with Turkey to monitor and screen those entering at the borders. “We need to save their lives, but will never forget our values. In Europe, we have managed to tear down borders, but must be sure new walls are not erected,” he added.

He closed his remarks discussing how Italy is open to dialogue with the United States and to listening, since we share many of the same fears. “I want to bring your ideas across the country …my endeavor will be easier because of you,”

Following the Ambassador’s talk, guests were invited to ask questions. The Ambassador responded to inquiries about the unemployment situation in Italy and the effects that Pope Francis has had throughout Italy in particular. Valente closed the forum by thanking the Ambassador, NIAF’s leadership and guests for attending, and announced the upcoming NIAF-Frank J. Guarini Congressional Bocce Ball Tournament on May 23, 2016.