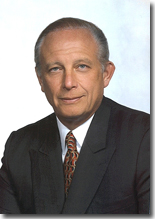 (Washington, DC – March 19, 2008) Gabriel A. Battista, former executive chairman of Talk America, has been elected to the Board of Directors of the National Italian American Foundation (NIAF). The election was held March 14 during the Foundation’s board meeting at the Embassy of Italy in Washington, D.C.

“Gabe’s vast experience and extensive knowledge of the media and communications industry is a welcome addition to NIAF’s leadership. His presence strengthens our board,” NIAF Chairman Dr. A. Kenneth Ciongoli said.

Battista received electrical engineering degrees from Villanova University and Drexel University, and an MBA from Temple University. Today, he serves on the board of trustees for Capitol College and American University of Rome. He is a member of the board of directors for Sentrillion Inc., TEOCO, a software company, and the Network Alliance. In 2004, Ernst & Young named Battista the Greater Washington Area Communications Entrepreneur of the Year.

Current members of the NIAF Board of Directors include some of the country’s top business leaders, including Ben Cammarata, chairman of TJX Companies, Inc.; Rocco B. Commisso, chairman and CEO of Mediacom Communications Corporation; Mario J. Gabelli of Gabelli Asset Management, Inc.; and James J. Schiro, CEO of Zurich Financial Services.