The University Club in Manhattan was the setting for the National Italian American Foundation’s (NIAF) fifth annual New York media networking dinner on March 10. The evening was an opportunity for Italian American and Italian journalists to socialize with colleagues and the Foundation’s leadership while learning about NIAF and its initiatives for 2005. The dinner was co-chaired by Jamie Colby, a correspondent/anchor for Fox News Channel, and Charles Gasparino, a senior writer at Newsweek. Prior to the dinner, Gasparino signed copies of his recently-published book “Blood on the Street: The Sensational Inside Story of How Wall Street Analysts Duped a Generation of Investors.”

This year NIAF has already held media networking events in Chicago, Los Angeles, San Francisco and Phoenix. NIAF holds the events to allow journalists an opportunity to escape their busy schedule for a few hours of meeting with colleagues and celebrating their shared Italian ancestry and culture. 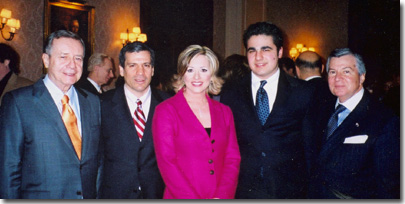