Leaders In Business And Entertainment Honored In NYC 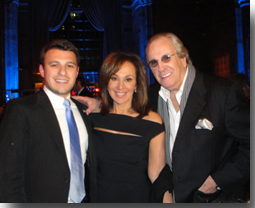 From the entertainment industry, actress Annabella Sciorra was honored with a NIAF Special Achievement Award in Entertainment.

The famous Bellini cocktail invented by Giuseppe Cipriani was served during a reception at the legendary Italian Renaissance-inspired Cipriani 42nd Street in New York City. NIAF’s Chairman Joseph V. Del Raso, Esq., welcomed the guests to the Foundation’s annual dinner. “Tonight, I see so many people committed to their heritage and community that it reminds us all exactly what we set out to preserve. On behalf of NIAF’s family, let me thank you for your support, confidence and belief in NIAF and our mission,” Del Raso said.

Barclays’ Jerry Donini congratulated his son on his birthday that evening as he received NIAF’s Special Achievement Award in Financial Services. “We all have the same story. I would certainly like to honor my parents, my wife and my children,” Donini said.

Dino Fusco of Goldman Sachs & Co. received NIAF’s Special Achievement Award in Real Estate Services. Fusco spoke about his childhood experiences growing up in an Italian household in Hartford, Conn. What was routine in my neighborhood including mozzarella, tomato and pesto paste sandwiches for school lunches, women dressed in black and green-energy vegetable gardens are now chic and routine in today’s society, Fusco recounted to the guests.

Earlier in the week NIAF kicked off its 2013 series of the Frank J. Guarini/NIAF Media Forums in the media capital of the world, New York City. NIAF Chairman Emeritus Hon. Frank J. Guarini welcomed the guests to the Pepper Hamilton offices in the New York Times Building. NIAF’s John Viola introduced the distinguished panelists: Carol A. Giacomo, editorial board member of The New York Times;Maurizio Molinari, bureau chief of La Stampa; and Fernando Napolitano, president and CEO of the Italian Business & Investment Initiative: Why Italy Matters to the World.” They discussed Italy’s unprecedented election results and what the results mean for Italy, Europe and the World.

The National Italian American Foundation (NIAF) is a non-profit organization dedicated to preserving and promoting the heritage of Italian Americans. Visit www.niaf.org.