(WASHINGTON, D.C.— June 10, 2016) The Fondazione Giovanni e Francesca Falcone and the Fulbright Program in Italy, in cooperation with the National Italian American Foundation (NIAF), are pleased to announce the 2016-2017 award recipients for the Fulbright Fondazione Falcone-NIAF Scholarship in Criminology. This year’s graduate scholars are Salvatore Orlando, a Ph.D. candidate in criminal law at the University of Palermo, and Jennie Sutcliffe, a graduate of the University of Wisconsin-Madison, with a master of science in philosophy and public policy from the London School of Economics. Each student will begin their program and research during the fall 2016.

“Through a rigorous and transparent selection process, the Fulbright program leads in identifying outstanding individuals, said Paola Sartorio, executive director of the U.S. – Italy Fulbright Commission. The program with NIAF and the Fondazione Giovanni e Francesca Falcone promotes diversity and mutual understanding by broadening the scope of our scholarships and making an even greater impact on society.”

Through the Fulbright Fondazione Falcone –NIAF Scholarship, Orlando  will conduct his research at the University of Virginia School of Law.  He will focus on economic crimes, including money laundering and the  connection between organized crime and white-collar crimes.  A native of Palermo, Italy, Orlando plans to return to Sicily to complete his Ph.D. at the University of Palermo.  He will seek a position as a lawyer at a national or international organization.

At the Fondazione Giovanni and Francesca Falcone, Sutcliff will conduct a community needs assessment to identify opportunities for at-risk youth in Palermo. As part of her research, and in an effort to engage with the local community, she also will volunteer at Lavoro e Non Solo, a sustainable agriculture cooperative operating on reclaimed mafia land. Born in Ithaca, N.Y., and  currently a resident of Chicago, Ill., Sutcliff will return to her position as director  of juvenile justice at Sargent Shriver National Center on Poverty Law in Chicago.  She plans to share with her colleagues the best practices learned in Palermo, and continue  to work on juvenile justice issues.

“The National Italian American Foundation’s leadership congratulates the two recipients and wishes them the best of luck with their research. We are truly honored to partner for the second consecutive year with the U.S. – Italy Fulbright Commission and the Fondazione Giovanni e Francesca Falcone to create another unique opportunity for a U.S. graduate student and an Italian student that speaks to NIAF’s mission to serve as a bridge between Italy and the Italian American community.  Together, we will continue to make an even greater long-term impact on the field of criminology,” said NIAF President John M. Viola.

For 2017- 2018, the Fondazione Giovanni e Francesca Falcone and the Fulbright Program in Italy, in cooperation with the National Italian American Foundation (NIAF), will award a second Fulbright Fondazione Falcone-NIAF Scholarship in Criminology to fund the research in criminology for one Italian student and one American student.

The 2017-2018 scholarships will be awarded to students and graduates at the Bachelors, Master of Arts, Doctor of Philosophy and Juris Doctor levels, with special interest in criminology and related disciplines, including economics, sociology, education and anthropology.  Preference will be given to students who are enrolled in a graduate program in criminology at a university in the United States at time of application.  Knowledge of Sicily’s history, and economic and social background, will have priority in the selection process. Candidates also must be proficient in the Italian language at the time of application.

Applicants can choose from a six-to-nine-months period of study during the academic year 2017-18. The scholarship award will depend on length of study. The award recipient also will be required to participate in an event organized by Fondazione Giovanni and Francesca Falcone on May 23, 2018, the anniversary of the death of Judge Giovanni Falcone, in Palermo, Italy. American students must submit applications for the academic year 2017-18 by October 11, 2016. Italian students need to submit their applications by February 16, 2017.

Fondazione Giovanni e Francesca Falcone was established in Palermo, Italy, in 1992. The principal aim of the Foundation is to implement initiatives of the highest social interest, including promotion of study, research, and cultural and assistance activities, to promote the development of the anti–mafia culture in society and, in particular, among young people.

The Fulbright Program in Italy promotes study, research and teaching opportunities in Italy and the United States through a program of scholarships for Italian and U.S. citizens.

The National Italian American Foundation (NIAF) is a non-profit organization headquartered in Washington, D.C. It is dedicated to preserving the heritage of Italian Americans.   Visit www.niaf.org. 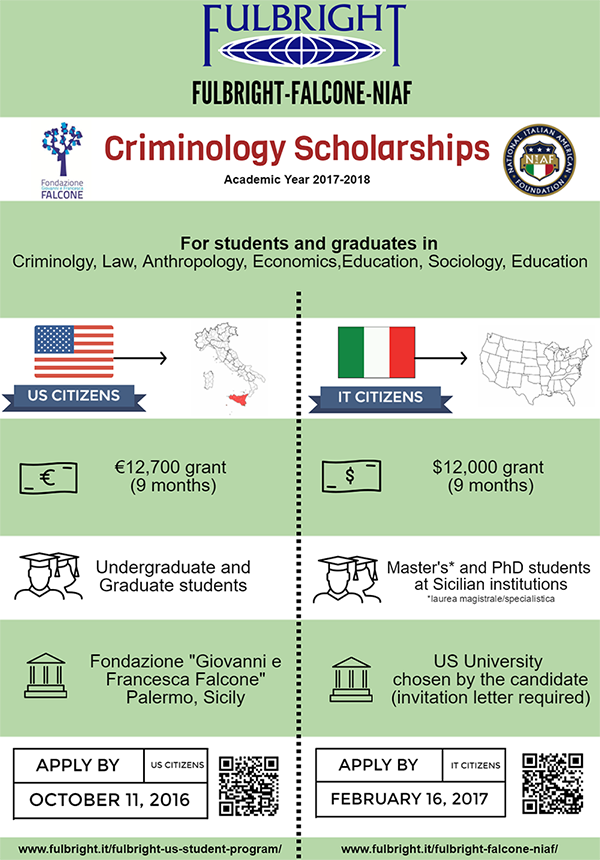