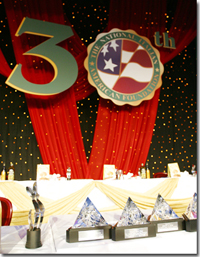 NIAF celebrated its 30th Anniversary with more than 3,000 supporters from the U.S. and Italy at the Hilton Washington and Towers in Washington, D.C., October 14-15, 2005. The convention weekend featured conferences, lectures, film screenings, a celebrity auction, and the 6th-annual Salute to the Martini featuring music by Jay Black and the Americans.