Successful Italian American filmmakers, Anthony and Joseph Russo, have a cinematic repertoire that reaches from the highest grossing Marvel films, to Emmy’s for their prime-time projects. As active members of the Italian Sons and Daughters of America (ISDA), they’ve partnered with NIAF and ISDA to develop The Russo Brothers Italian American Film Forum. 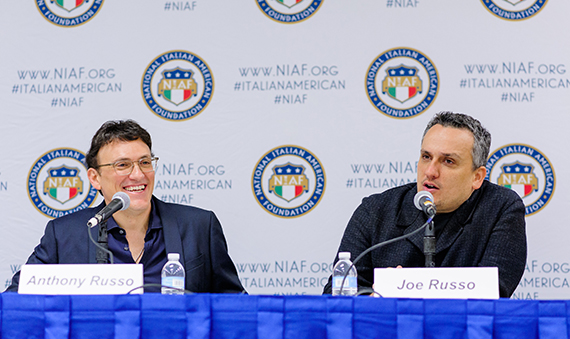 The Forum provides an incredible opportunity for inspired and creative artists to craft films that explore the Italian American experience. Joe and Anthony invite you to explore the present, past, and future of this unique and important cultural expression and identity.

A select number of applicants will be awarded a $8,000 grant that serves as a production budget for the story they’d like to develop and create for the screen. Documentary, narrative, fiction, and nonfiction are all acceptable formats. There are few rules to the content of your film, only that it illuminates some aspect of the Italian American experience.

These grants are open to people of all nationalities and backgrounds, as the Italian American culture has touched so many of us in profound and resonant ways.

Grants will be awarded based solely on the promise of a film’s premise, how it relates to the Italian American experience, and the creative potential of the filmmakers.

The timeline below highlights all of the key dates to be aware of throughout the program’s entirety. If you’re selected for our grant, your acceptance means an obligation to deliver a film within the bounds of what you outline in the following application pages and by the due date listed below. Failure to complete a film by the final due date or delivery of a film unrelated or outside its immediate description written within the application will result in a full revocation of funds and complete disqualification.

NIAF and ISDA will display the films on their respective websites and reserve the right to screen the films at NIAF and ISDA events as well as not-for-profit events.

We couldn’t be more excited to offer a platform for voices worldwide to tell original Italian American stories.

Applicants from the United States, Italy, Canada and Spain submitted proposals generating a pool of traditional and contemporary topics explored in both creative and thoughtful ways. As a result of the high quality of this year’s applications, competition for the grants increased significantly. For this reason, the Russo Brothers and AGBO encourage individuals whose submissions were not selected to consider reapplying for a grant next year.

“This year, we received nearly 200 grant applications, the most ever submitted for the Film Forum,” said Anthony Russo.

“We’re so impressed by the originality and ambition of the applicants’ proposals,” added Joe Russo. “They speak to the unexpected range of narratives flowing from the Italian American experience, which made the grant selection process extremely exciting.”

“The quality and record-breaking number of applications this year resulted in a very competitive process,” said NIAF Chairman The Honorable Patricia de Stacy Harrison. “The committee appreciates the talent and commitment demonstrated by the grant applicants through these powerful and diverse stories representing our Italian American heritage.”

The eight applicants listed below have been selected to receive $8,000 each to fund their film projects. These grant recipients present a specific vision for the exploration of what we believe are truly interesting and dynamic themes. We are eager to see each of their films come to life in the coming months.

The 2021 recipients and the subject of their films are:

Alessia Crucitelli, whose film, Leaving the Factory, focuses on the story of the mistreatment of Italian immigrant women factory workers, and their struggle to overcome oppression.

Peter Ferraro, whose film, Il Messaggero, relates how an immigrant’s quaint story brings joy to an Italian village and its sister community 5,000 miles away.

Rosanne Limoncelli, whose story, Two Teresas, explores the relationship between two Americans of different generations and cultures whose friendship shows we have more in common than divides us.

Ann Potenza, whose story, The Feast of San Gennaro in LA, relates the recreation of the storied NY festival in Los Angeles as told through the eyes of the event organizers.

The grant recipients will submit their completed films, and three finalists will be invited and have their films screened during NIAF’s 46th Anniversary Gala Weekend, with the winning film announced on Saturday, October 23, 2021, at the Gala Dinner.

The Russo Brothers are grateful to NIAF and the ISDA for their support in this endeavor. Furthermore, they kindly thank all the applicants and finalists for their submissions and look forward to reading more in 2022! For more information on The Russo Brothers Italian American Film Forum, please visit https://www.niaf.org/programs/russo-bros-film-forum/.

ABOUT THE NATIONAL ITALIAN AMERICAN FOUNDATION
The National Italian American Foundation (NIAF) is a non-profit, non-partisan organization dedicated to preserving, promoting and protecting the Italian American heritage and culture. Based in Washington, D.C., it is the major advocate for nearly 25 million Italian Americans, the nation’s fifth largest ethnic group. To learn more about the Foundation and to become a member, please visit www.niaf.org.

ABOUT THE ITALIAN SONS AND DAUGHTERS OF AMERICA
For 89 years, the Italian Sons and Daughters of America (ISDA) has kept a strong sense of community alive and thriving to become one of the largest and most financially successful Italian American organizations in the country. The ISDA unites Italian Americans across states nationwide to celebrate our culture and preserve the traditions our ancestors brought with them from Italy. To learn more about the ISDA and become a member, please visit www.orderisda.org.