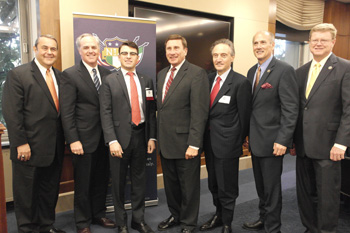 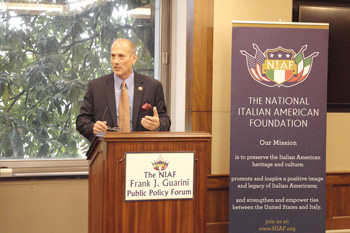 At the podium, Valente welcomed more than 40 guests and Rep. Marino, referring to him as “one of the most principled members of Congress.” Valente also reminded guests about two upcoming public policy events: the annual bocce tournament scheduled for June 1; and the luncheon with National Endowment of the Humanities (NEH) chair to discuss the documentary “The Italian Americans” on June 2.

Rep. Marino first greeted guests in Italian and shared stories of growing up as a second-generation Italian American. His maternal side of the family was from Calabria and paternal side from Sicily.  Rep. Marino said he was often asked, “What is it like to be an Italian American?” He said, “It’s family, friends, it’s all about food, of course.”  He also spoke about antitrust, telecommunications and internet sales tax. As subcommittee chair, his aim is to work to change how regulations are made. He ended his speech by asking the audience, “What should we be doing in Congress?” A lively question-and-answer period followed.

Rep. Marino is a lawyer, former district attorney for Lycoming County, and a former U.S. attorney for the Middle District of Pennsylvania. In 2010, he was elected representative for Pennsylvania’s 10th Congressional District. In addition to being a member of the Judiciary Committee, Rep. Marino serves on the House Foreign Affairs Committee and the Committee on Homeland Security.

NIAF is a nonpartisan, nonprofit organization that works closely in Washington, D.C., with the Italian American Congressional Delegation and The White House as a national voice of the Italian American community to promote stronger economic, social and cultural relations between Italy and the United States.  Our cornerstone programs include scholarships and cultural grants to support educational and cultural activities at many colleges and universities.  For more information, visit www.niaf.org.