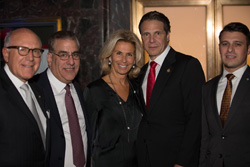 “On behalf of the National Italian American Foundation’s Board of Directors, we congratulate Westchester County District Attorney Janet M. DiFiore on her nomination as chief judge of the New York Court of Appeals, the state’s highest court, by Governor Andrew Cuomo.   DiFiore is the second woman to head the court in its history.

“I have had the pleasure of working with Janet through the years and she is truly a source of pride for our community. Her commitment and dedication serve as an inspiration for all of us. Special thanks to Governor Cuomo for making such an inspired decision. We know that she will serve the citizens of New York State well as chief judge.

“We are extremely proud of her distinguished record serving as a county judge and state Supreme Court justice.  She has supervised criminal courts for the ninth Judicial District in the lower Hudson Valley and chairs the Joint Commission on Public Ethics in the State of New York.

“Earlier this year at the NIAF New York Gala, Governor Cuomo joined the more than 500 guests to present the inaugural Mario M. Cuomo Award in Public Service to DiFiore. The award recognizes Italian American public servants who are known for their passion, conviction, and dedication to serving the Italian American community.

“Her hard work and passion serve as an inspiration to all in the legal profession and beyond.