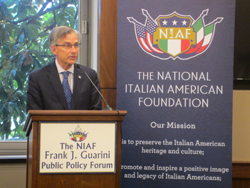 Adams described “The Italians Americans” as “a beautifully crafted documentary, not easy to tell, yet shows the difficulties and contributions of Italian Americans.” He added, “The documentary has a deep national relevance because America is composed of these stories and constitutes who we are.”

Pascrell called “The Italian Americans” an “incredible documentary that resonated with the New Jersey constituents.”  Tiberi thanked the National Italian American Foundation for its leadership in bringing the delegation together through these forums. “The documentary series continues to educate future generations about the tough journey of the early Italian Americans, so we can be here today in the greatest country,” he said. 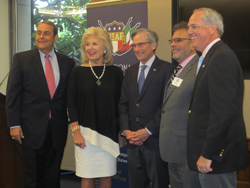 NIAF’s leadership, including the Foundation’s Government Relations and Public Policy Committee Chair Mark Valente lll and NIAF Board Member Hon. Mike Ferguson, a former member of Congress, introduced NIAF Vice Chairman and Corporation for Public Broadcasting (CPB) President and CEO Patricia de Stacy Harrison. Harrison spoke with emotion about the series that CPB helped fund. “The series is a small way to say thank you to the ones that came before us.” She told an inspiring tale by her grandfather between choosing to be a turtle or eagle in one’s lifetime. Harrison said, “the Italians portrayed in the series were all eagles!”

Additional remarks were made by Jeff Bieber, executive producer of the series.  Bieber outlined the contributions of Italian Americans as well as other immigrant groups who have been portrayed in recent WETA documentaries.

To close the luncheon forum, Valente thanked the Corporation for Public Broadcasting, the National Endowment of the Humanities and WETA-TV for their hard work and generous contributions to the series. He announced an upcoming luncheon in the fall.  The speaker has yet to be determined.

NIAF is a nonpartisan, nonprofit organization that works closely in Washington, D.C., with the Italian American Congressional Delegation and The White House as a national voice of the Italian American community to promote stronger economic, social and cultural relations between Italy and the United States.  Our cornerstone programs include scholarships and cultural grants to support educational and cultural activities at many colleges and universities.  For more information, visit www.niaf.org.