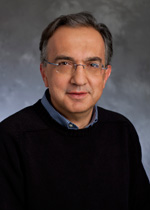 Marchionne began his professional career in Canada, working for Deloitte & Touche from 1983 to 1985. After numerous positions at companies in Canada, he held jobs of increasing responsibility at Algroup, headquartered in Switzerland, between 1994 and 2000, and eventually became its CEO. Marchionne became a member of the Fiat S.p.A. Board of Directors in 2003 and CEO the following year. In 2009, he was appointed CEO of Chrysler Group LLC (renamed FCA US LLC in 2014), and in September 2011, also became its chairman. In October 2014, Marchionne became CEO of Fiat Chrysler Automobiles N.V., and chairman of Ferrari S.p.A., the positions he holds today.

Currently, Marchionne serves as a member of the boards of Phillip Morris International Inc., and the Peterson Institute for International Economics; and chairman of the Council for the United States and Italy.