The dramatic vista of Civita di Bagnoregio, in the province of Viterbo, is awe-inspiring and transports you to another time and place. Che bello as the medieval city rises from the valley below. With the clouds rolling away, it appeared both mystical and magical. Taken in November 2014. 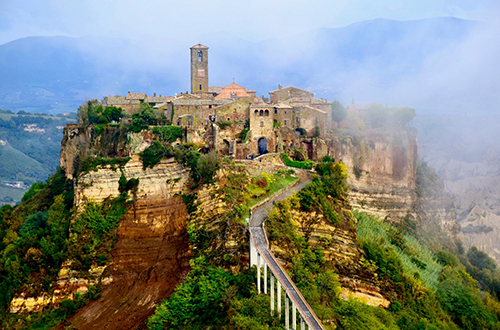 The unexpected beauty of the island of Lampedusa is breathtaking, with its crystal clear aqua waters and fantastic beaches. Geographically located closer to Africa than it is to Sicily, it is a true hidden gem of the Mediterraneo. Lampedusa is truly a paradise, providing tourists and famous Italians alike an amazing getaway. Pictured is the coastline area called Tabaccara, a perfect place to anchor the boat and take a jump in the warm turquoise waters.
Photo captured in August 2010.

Two nonnas enjoy the unexpected passing of tourists through their quaint village home of Fornelli—one of the “borghi piu’ belli d’Italia,” tucked away in the little-known Italian region of Molise. If this candid moment doesn’t say “che bello,” I don’t know what does!

Che bello! The town of Scapoli is a hidden gem from this year’s region of appreciation! Tucked away in one of these little orange buildings is the International Bagpipe Museum that preserves some of the world’s oldest bagpipes from all over Italy and Europe. Fewer than 700 Italians call Scapoli home. If only people knew about the region’s amazing history, traditions, and untouched landscape….

An old man stands next to his bicycle in the famous Piazza Del Duomo in Lecce, Puglia. Also nicknamed the “Florence of the South” for its charm and Baroque architecture, the city exudes a unique beauty that blends in perfectly with its inhabitants to create moments of “grande bellezza.” Shot in 2018.

The photo was taken July 9, 2018. Bike riding for four hours in the beautiful hills  of the Marche Region, my cousin and I had to stop to immortalize this beautiful moment. The town on top of the hill is called Montalto. We made it up there about 30 minutes later, refilled our water bottles in a fresh spring water fountain, and started our descent towards the Adriatic Sea. A memorable beautiful day. A huge field of sunflowers like you only see in postcards.
Che Bello!